Toxicology is a study of the health of humans and other living organisms and conservation of their ecosystems. Main research topics include identification of substances (hazardous) which disrupt homeostasis of an organism and ecological balance, clarification of their impact, mechanism of action and transmission, and their prevention and control.

Allow us to briefly introduce some of our current research projects. 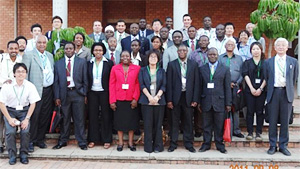 How do you imagine Africa? Do you see it as an undeveloped continent, abundant with animals such as lions, elephants, giraffes and hippopotamus across the great Serengeti ?

We are currently involved in surveys and research projects in various African nations in cooperation with local researchers, research assistants, and the local community. Collaborative research projects are being carried out with affiliated institutions in over 10 nations, including Zambia, South Africa, Ghana, Ethiopia, Egypt, Nigeria, Cameroon, Tanzania, Kenya, Botswana, Uganda, and Sudan. 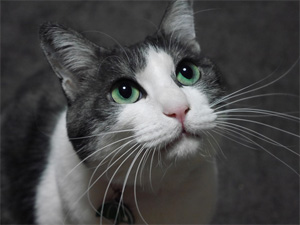 In our daily life, we come in contact with many different chemicals. These chemicals enter our body through various pathways, including ingestion, touch, and inhalation.

In like manner, pets which share our living space are also thought to be affected by these same chemicals entering their bodies. For example, chemicals used as flame retardants for furniture and electric appliances are always close by. Exposure to these flame retardants through house dust, and chemicals contained in pet food, is of growing concern since they may be harmful to the health of the pet or may trigger illness or disease.
However, much of the metabolic mechanism of our pets is unknown, and we still do not know the impact of such chemical exposure.

At our Laboratory of Toxicology, we aim to discover how pets, especially cats, metabolize chemicals. We also hope to evaluate the effect of chemicals on a pet’s health. 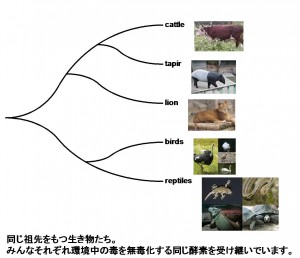 For a creature to defend itself from harmful substances, its defense system must continuously evolve. This defense system is associated with various proteins, such as cytochrome P450. In order to understand how chemicals affect different living organisms, detailed understanding of these proteins is essential.

At our Laboratory of Toxicology, we study the defense mechanisms of animals at the molecular level . Targeted species in our research include carnivorous animals such as lions, sea lions, Steller’s sea eagles, and white-tailed sea eagles which are exposed to high concentrations of contaminants; animals are exposed to poisonous or chemically contaminated plants , such as Yezo sika deer, tapirs, giraffes, and elephants; farm animals such as cows, horses, and roosters; amphibians highly susceptible to contaminants in a semi-aquatic environment, such as frogs and newts; and chordates which are the key to understanding how defense systems commonly seen in vertebrates have evolved.

Functional foods that activate such defense system and which are beneficial to health are also being explored.

Elucidation of mechanisms involved in the development of rodenticide resistance 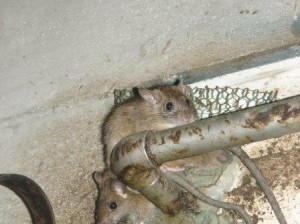 Black rats and brown (Norway) rats are known to transmit various zoonotic diseases including bubonic plague and leptospirosis and as a result are often targeted for extermination.

Rodenticide (rat bait poison) is typically used for rat control, but in recent years, super rats which are immune to rodenticide, even after ingesting a lethal dose or more, have emerged, causing a major problem in extermination. In addition, risk of secondary damage from rodenticide, such as wild birds and other animals not targeted for extermination accidentally ingesting the rat bait or preying on rats that have died from rodenticide.

Here, we seek to understand the mechanism responsible for the development of super rats and rodenticide resistance, and the effect of rodenticide on non-rodent species. Rodenticides which can effectively kill super rats are under development at our Laboratory of Toxicology.